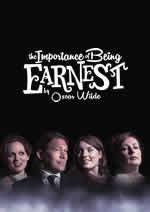 The Importance of Being Earnest


Two young gentlemen living in 1890’s England have taken to bending the truth in order to put some excitement into their lives. Jack Worthing has invented a brother, Earnest, whom he uses as an excuse to leave his dull country life behind to visit the ravishing Gwendolyn.

Algernon Moncrieff decided to take the name ‘Earnest’ when visiting Worthing’s young and beautiful ward, Cecily at the country manor. Things start to go awry when they end up together in country and their deceptions are discovered – threatening to spoil their romantic pursuits.

This well known and much loved classic play presents a challenge for any company because the audience in the main, will have preconceived ideas about the comedy and the characters.

The play was set almost in the round. The three sets were simply but well presented.  The arch of flowers for Act 2 was a good touch.  Costumes were effective although Algernon, as the man about town should have appeared much smarter than Jack, but this was not the case.  Jack, in his cream country suit, looked quite marvellous.

Reuben Milne was ideally cast as Jack. This was a very confident relaxed actor with an excellent speaking voice who moved well on stage. Rueben’s diction was very good and he was able to deliver the comic lines well.  He was partnered by Natasha Woodcraft as Gwendolen.  Here was another very fine performance. Natasha’s light voice with a good tone was excellent, her expressive face and mannerisms were a delight to watch. This was a captivating performance. This couple gave entirely believable performances and it was a pleasure to watch them on stage. Rowan Marshal as Algernon began somewhat hesitantly. His voice had a good tone but at first he delivered his lines rather quickly so that some of his diction was lost.  However this improved as the play progressed. His manner after his engagement to Cecily was quite delightful and the ‘muffin’ incident with Jack at the end of Act 2 had terrific pace and energy. Abbie Miles as Cecily was another successful performer. This again was excellent pairing.  Abbie brought out the innocence of Cecily which effectively balanced the worldliness of Algernon.

Charlotte Edwards’ performance as Lady Bracknell was not entirely convincing at first. Lady Bracknell is described as a gorgon, a monster and this should be evidenced in her voice, demeanor and appearance. She should have presence from her first entrance, a more impressive hat would have helped this illusion.  Charlotte’s light voice lacked the upper class gravitas, the delivery of lines could have been more commanding, so that Lady Bracknell is seen to be imposing her opinions. George Kelly as Chasuble  was well cast.  His voice and attitude entirely in keeping with a country rector. Christine Suggars was convincing as Miss Prism especially in Act Three.  Don McKay was excellent in the cameo part of Lane.  He added much humour to Act One through his voice and delivery of lines.

This was an entertaining production.  However careful setting is needed when playing in the round. The nature of this setting imposes demands on the actors, they must be heard and understood even when they have their backs to the audience. Isobella was not entirely successful in achieving this. Chasuble had his back to the audience during his first appearance so I found it difficult to hear each line. Some key elements of the plot were also lost due to masking: it was difficult to see Algernon making a note of Jack’s address in the country in Act One and in Act Two the butler masked the comic effect of Cecily adding sugar to Gwendolen’s tea. Nevertheless, in general the setting worked well. The pace of the piece was good, especially in Act Two.

St. Neots players are to be congratulated on presenting an enjoyable piece of theatre. 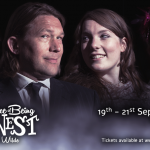 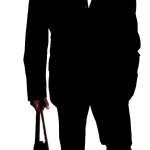 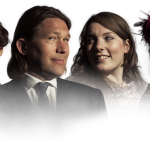