Snow White and the Seven Dwarfs


The Queen enters beauty contests constantly – and wins, but when her mirror chooses Snow White she sends the guards to kill her young rival.

The Queen loses patience and does the job herself, using a poisoned apple. She knows nothing about the handsome prince who is beginning a quest to find his princess in the forest.

The King’s privately built spacecraft is almost ready, and made giddy by the promises of universal fame awaiting the first pilot, the Queen snatches the helmet from Guard2 and rockets off into the void. He is left holding the Craft Course Reversal Mechanism, (the steering wheel!)

The Prince saves Snow White from the deadly fruit’s thrall and takes her back to the palace where the King abdicates and the new King and Queen embark on a long reign full of joy and justice.

The Spirit Of The Mirror

Chorus/Ladies & Gentlemen of the Court

Dancers & Animals of the Forest 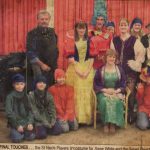 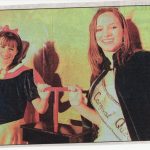 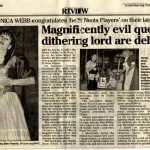