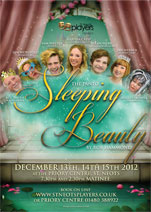 This was a traditional pantomime based on a well loved fairy story.

Backcloths were varied and interesting and were well lit particularly in the Witch’s lair. . The SJ Dancers performed well and with energy.  However except for the ballet scene in Act 2, their modern dress and dance routines seemed at odds with the panto period.   Music was via backing tracks. This approach demands precision and can be challenging, one moment’s hesitation and singer and music are out of sync. The Players rose to this challenge very successfully, the singing was one of the strengths of the performance. I really liked the performances of the songs I’ll be there for you and I will walk 500 miles.

The opening prologue was performed in front of plain curtains and as a result was somewhat restrained  and low key, but the appearance of Caraboss as played by Shelley Browne, and  Jan Webber’s Fairy Nuff created more pace and action.  These were two very strong confident performers who maintained their characters well. Caraboss was particularly unpleasant and raised the right sort of boo hiss from the audience.  Fairy Nuff was a complete contrast, with a very posh accent and a most determined air, both were excellent and added much to the production.

The scenes following the prologue were more colourful and imaginative. This was a small cast but with strong confident actors. Ian Worsfold made an excellent Dame as Queen Bea. He had good rapport with the audience, delivered lines well and by Act 2 was in overdrive so that he commanded the stage. He was very well supported by Sam Waters as Chip. This too was an exuberant performance. Beauty, Larissa Crisp and Braveheart, Sean Webb, sang well and were entirely suited to one another. Here were two more performances well cast and in keeping with traditional fairy stories. Adam Greaves and Chris Baker as Princes Henry and Eric were suitably stupid and able to add more humour to the production.

The pace of the performance was good.  The fairy story had an added twist after Beauty had woken up.  This was inventive and added more action to the plot. But it was in Act2 that the panto spirit really came to life. This was thanks to Ian Worsfold’s Dame. In particular, his conducting of the community sing song was very skilled and brought the audience to life.

Marina Coleman-Rivers ensured that this was an entertaining evening, technically well presented and with a small but strong cast. The result was that the audience were able to enter into the happy atmosphere of a traditional pantomime. 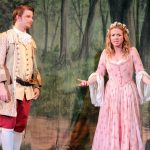 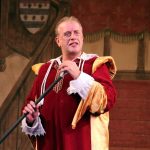 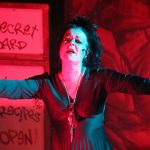 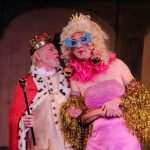