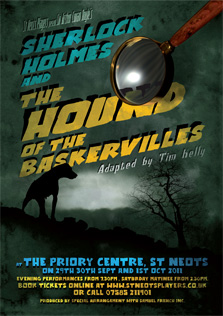 
Sir Henry has become heir to the vast Baskerville fortune, a legacy that comes complete with a family curse — death at the fangs of a living horror prowling the English moor. Only Sherlock Holmes can stop the beast from striking again.

This was my first visit to the St Neots Players as I was standing in for Don McKay who was on holiday, and I was certainly made very welcome.

Performing at the Priory Centre must present numerous problems, not least the financial outlay and performing in a large auditorium to a modestly sized audience. The two latter points had been superbly overcome by performing in the round on the floor, thus eliminating too much empty space for cast and audience alike, in such large premises.

On entering we were treated to an excellent layout of furnishings thus setting the scene for what was to prove an excellent production. Managing to borrow the magnificent furniture was a coup in itself. However, having been advised in the programme that the scene was the sitting room of a manor house, I found the French windows confusing as they implied that they were the front entrance to the house! Just a small point as it all looked brilliant. Credit must go the director for the hours of meticulous blocking as moves and positions of the cast at all times enabled the audience to see and hear everything. Special mention must be made of the excellent choice of mood music and sound effects which immediately created the atmosphere as the houselights went down.

It was to be expected from the, already mentioned, ambience that we were to see some great performances and I was not disappointed. Geoff Unwin’s portrayal of the iconic Sherlock Holmes was excellent as was Lawrence Allwright as Dr Watson. They made a good partnership. Other members of the cast, namely Charlotte Edwards as Lady Mortimer and Simon Ockenden as Lord Henry gave very convincing performances with true British aplomb. George Kelly as Barrymore and Tracy Gould as Mrs Barrymore helped to create the sinister atmosphere required of this play. Charlotte Evans and Nick Fennelly as Kathy and Jack Stapleton created a somewhat apprehensive link to the story, not their fault! ‘The play’s the thing!’. Add to these characters Meg Riley as the maid Perkins and Abbie Miles as Laura Lyons and we were treated to a great evening’s entertainment. Well done.

One small criticism; as the programme informed us that the play was set in the 1940’s, I was not convinced, by the assorted costumes worn, that we were indeed in that era, and not one 1940’s hairstyle in sight! I lived through that period and remember it well.

Thank you for inviting me to a very enjoyable evening.