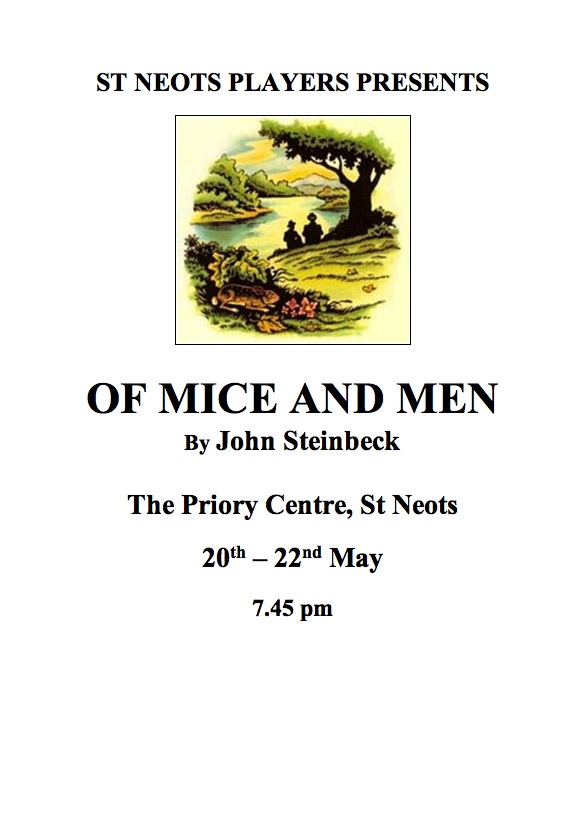 Of Mice and Men


The novel takes place in the California valley along the Salinas River. There are two settings for the action: the banks of the Salinas River and a nearby ranch. George Milton, small and smart, and his friend Lennie Small, a large man with mild retardation, are on their way to jobs at a ranch. They stop by the Salinas River to take a break from their long walk. Lennie cannot remember where they are going, and George, annoyed, reminds him about their jobs. Lennie looks in his pocket for his work card and finds a dead mouse, which he found by the side of the road. Lennie likes to pet soft animals, like mice and puppies, but he is very strong and often kills his delicate pets. Lennie tries to hide his mouse from George, who demands it from him and throws it across the river.

That evening, Lennie goes to find his mouse, which makes George very angry. He argues with Lennie, but soon feels bad and tries to console him. George tells Lennie how one day soon they will own a farm of their own, where they will grow their own food and have rabbits Lennie can tend.

The next morning Lennie and George arrive at the ranch. The boss is annoyed because they have arrived late. The boss’ son, Curley, is a small man who hates big guys like Lennie. He and George have a small confrontation. Soon after Curley leaves his wife enters. Her provocative dress and pose make George anxious. He warns Lennie to keep away from both Curley and his wife.

Two more workers, Slim and Carlson, come into the bunkhouse. Slim’s dog just had puppies, and Lennie is anxious to have something soft to pet. Carlson suggests that Candy, an old man and fellow worker, kill his old smelly sheepdog and take one of Slim’s pups.

Slim gives Lennie a pup, and he spends much of the evening out in the barn petting it. George tells Slim what happened at their last job. They were run out of town after Lennie unintentionally assaulted a woman. The woman went to the police and Lennie and George had to leave town.

Candy comes in with his dog and Carlson starts pressuring him to let him kill it. The dog is old and arthritic, but Candy has had him for years. Since he is the only one who wants to keep the dog, Candy reluctantly gives in and lets Carlson shoot his old friend.

George and Lennie start talking again about the farm they hope to get, and Candy overhears and asks if he could come too. He has some money saved up, so George decides he can come. Curley comes into to the bunkhouse, and when he sees a smile on Lennie’s face he imagines that Lennie is laughing at him. He attacks Lennie, who doesn’t want to fight. In defense, Lennie grabs Curley’s hand and badly breaks it without knowing what he has done.

That evening, everyone goes into town, except for Crooks, the crippled Negro stable buck, and Candy, Lennie, and Curley’s wife. Crooks lives alone in the barn because he’s black. Lennie comes in looking for his puppy. He and Crooks start talking, and Crooks expresses his feelings of loneliness. Lennie tells Crooks about their farm, but Crooks is doubtful. After listening to Candy for a few minutes, Crooks changes his mind and asks if there might be a place for him on the farm.

Curley’s wife comes into the barn, making all the men uncomfortable. Candy tells her to leave. She gets mad and criticizes them and their dream, making Crooks angry. She harshly reminds him he is just a worker, and a black worker at that. Crooks silently hangs his head. There is the sound of the men returning, so Curley’s wife leaves. As Candy is leaving, Crooks tells him he wouldn’t be interested in coming with them after all.

The next afternoon, Lennie is in the barn alone with his puppy. He accidentally killed it with his strong hands. Curley’s wife comes in, and sits down next to Lennie. She tells him how she could have been in the movies, but Lennie continues rambling about the rabbits on their farm. When she finds out how much Lennie likes soft things, she offers to let him touch her hair. Lennie strokes too hard and she gets frightened. He tries to quiet her and accidentally breaks her neck. Lennie runs and hides by the banks of the river. Candy finds Curley’s wife, and goes to tell George. The other men come in and see what happened, and they get their guns. They want to find Lennie and kill him.

Lennie is sitting by the banks of the river. George shows up, and he assures Lennie he isn’t mad at him. Lennie wants to hear about that piece of land they are going to get, and the rabbits for him to tend. George tells him, and when the men are nearly there, George shoots Lennie in the head. The men appear, and Curley and Carlson congratulate George. Slim understands George didn’t want to shoot Lennie, and he leads him away, offering him comfort and a drink. 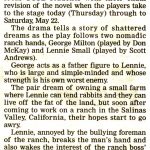