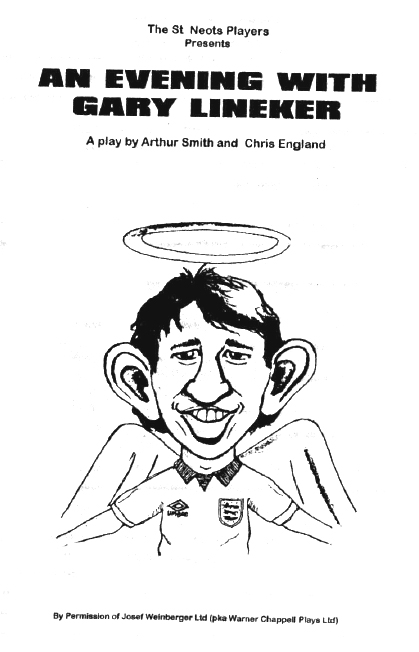 An Evening with Gary Lineker


An Evening with Gary Lineker ignited the audience’s collective memory of that fateful day of 4 July 1990, when England lost to West Germany in the semi-final of the World Cup. In the play, unhappily married Monica and Bill are on holiday in Majorca with Bill’s friend, the sexy Dan Hudson. Monica fantasises about a relationship with the God of football, Gary Lineker, to escape the horrible reality: her clothes stink of pickled onions due to a prank by Bill’s colleague Ian; she is married to a ‘sad w***er’ and is having an affair with Dan, a man who tells her, ‘Stoke City FC is the most important thing in my life’. In the company of the infuriating Ian and a mad German tourist rep Birgitta, they watch the match and the drama unfolds both on and off the pitch. This was a superb production, which received a standing ovation from a packed house. Jasper and Maram were amazingly convincing in their unfamiliar rôles of emotionally inarticulate football fanatics, while Seb was hilarious as the ghastly, plumbing-obsessed Ian: ‘the boys done good.’

It was, however, a ‘game of two halves’ and Neda and Fleur ‘gave 110%’. Many in the audience identified with Fleur’s exasperation with men. She was the only intelligent character in the play, and beautifully covered a whole range of emotions, from resignation and frustration to final elation, while Neda’s energy and vivacity shone through her portrayal of a rather different Birgitta.

Unfortunately we have no records of the cast and crew.