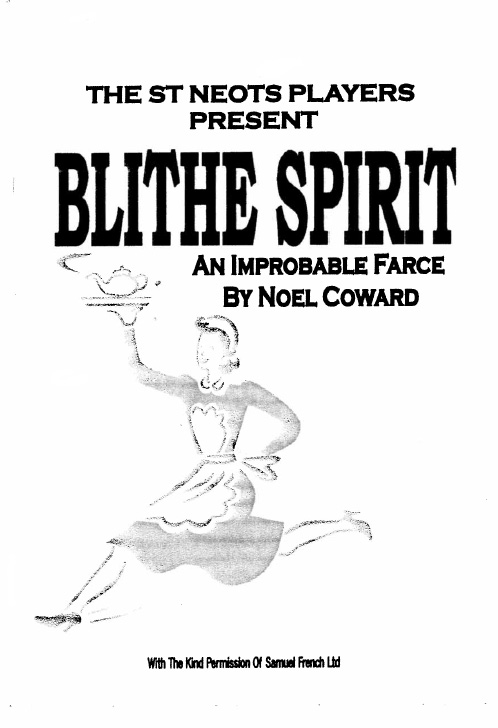 
Charles Condomine, a novelist, and his wife, Ruth, have invited their friends Dr and Mrs Bradman to join them for drinks and dinner with a local clairvoyant, Madame Arcati. Charles is planning a novel about a homicidal spiritualist and wants to observe the behaviour of Madame Arcati during a séance after dinner. The Bradmans arrive, and the four friends discuss Madame Arcati, sure that she will be a harmless fraud. They are interrupted when Madame Arcati arrives, dinner is served, and the séance begins. Much to the surprise of the two couples, there are supernatural manifestations–the table trembles, Madame Arcati falls into a trance, and Charles hears the voice of Elvira, his first wife, whom he loved dearly but who died several years ago. Frightened, he wakes Madame Arcati, and the party breaks up.

As Charles shows the Bradmans out, in walks the ghost of Elvira, grey from head to foot. Only Charles can see and hear her, and he and Ruth immediately quarrel about her presence. The cross-conversation between Charles and Ruth and Charles and Elvira is exasperating to Ruth, who, believing Charles is drunk, goes off to bed in a huff.

The next morning at breakfast, Ruth is very cool to Charles and insists that he had too much to drink the night before. When he insists that he had a hallucination, Ruth attributes it to indigestion. The bickering continues until Elvira enters, carrying roses. When Charles sees her, a comical miscommunication begins, with Ruth unable to see or hear Elvira and feeling certain that Charles’s unpleasant remarks are meant for her. Ruth becomes convinced her husband is mad and tries to soothe him and go for a doctor. Charles, frantic to be believed, enlists Elvira’s help, and she moves a bowl of flowers around the room to prove her existence. Ruth becomes hysterical, not sure whether she is being deluded, is going insane, or is actually in the presence of a ghost.

Later, alone, Ruth visits Madame Arcati again–and is shocked and angered that Madame Arcati is unable to dematerialize Elvira and also believes that Charles subconsciously wanted Elvira back. When Ruth is rude to her, the spiritualist leaves in a huff. Elvira and Charles enter, and Elvira seems delighted that she will be a permanent guest. Ruth swears to rid herself of the ghost.

Suspense builds when, several days later, both Edith (the maid) and Charles have accidents–Edith because of axle grease rubbed on the stairs and Charles on a ladder that proves to have been sawed nearly in two. Ruth insists, and Charles is convinced, that Elvira is trying to kill Charles in order to have him for herself again. Ruth leaves in the car, which Elvira had booby-trapped for Charles, and is killed in the ensuing “accident.” The act ends with Elvira frantically retreating from Ruth’s ghost, invisible to Charles.

Charles calls Madame Arcati, who goes into a trance to try and dematerialize Elvira. It works in reverse though, and in walks the ghost of Ruth, now plainly visible, along with Elvira, to Charles. After trying all sorts of supernatural tricks, Madame Arcati is about to despair; the ghosts simply will not go away. Then she realizes that it was not Charles who called up Elvira and Ruth–it was Edith. The maid, when discovered, is contrite, and Madame Arcati hypnotizes her; and the ghosts vanish at last.

Charles, now alone, but not really alone, teases Ruth and Elvira about how much he will enjoy his freedom. Vases crash into the fireplace, pictures come crashing down, the mantel topples–and the curtain falls.