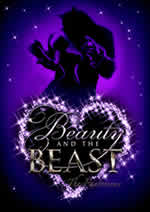 
Once upon a time there was a handsome but selfish Prince who fell foul of the evil Fairy Demonica who put a curse on him to spend the rest of his life as a lonely Beast in his castle.

Can anyone love the Beast and unlock this wicked curse?

The tradition of family pantomime continues at The Priory Centre as The St. Neots players re tell this enchanting story.

Filled with hilarious characters such as the very timid Butler Mr Shriek and the loveable good Fairy Angelica. Not to mention the two dames and Beauty’s lazy sisters Agnes and Agnetha.

Meet a host of other wonderful characters including two upper class twits an suitors for Beauty’s hand in Marriage Sir Toff and Sir Fopp. Not to forget the lovely Beauty and her captivating love that could break the curse of the Beast.

Fantasy, Make Believe, Music and Mayhem in this Spectacular Family show not to be missed.

With quite a few newcomers in the cast for this year’s St. Neots Players pantomime, Sean Webb, in his debut role as Director, had attempted to bring some new creative ideas to the traditional British pantomime in this production of the classical fairy tale of Beauty and the Beast. His mentor, Marina Coleman-Rivers, as Assistant Director, in her piece in the programme, rightly states that “pantomime is a uniquely British art form, beloved by many, none more so than the actors themselves”.

With Lorraine Mason’s up-dated script of this much-loved magical tale of how love can conquer all, the cast used every opportunity to entertain the small, but supportive first night audience. The prologue, with the “live portrait” of the hapless Prince Andre, played by Matt Shaw, centred on a black draped stage and transformed into the Beast by the wicked fairy Demonica, nicely played by Shelley Browne, with Charlotte Evans as the good fairy Angelica, powerless to break the spell, was a novel introduction to the plot. Simple, but effective, backdrops worked well for the various scenes that followed, which, with minimal props, made for clean and swift scene changes by the backstage crew, appropriate sound and lighting effects adding to the action taking place on stage.

However, the moving disco-style lighting that accompanied the vocal numbers was not at all in keeping with the otherwise classical presentation and, I felt, was quite distracting. Backing tracks are not the ideal vehicle for producing good quality sound and therefore, the vocal numbers were lacking somewhat in musicality, at times voices were distorted and some of the cast would have benefited from vocal coaching. The choreography for the various chorus numbers was a little disappointing and quite repetitive. An exception, perhaps, was the Beast’s servants “vamp” number with Demonica, the wicked fairy, in the parlour of the Beast’s castle. The costumes for most of the principals were appropriate, apart from those of the two ugly sisters, which were, in contrast, too modern, the Beast’s servants costumes too vaudeville and some of the villagers costumes could have been more colourful.

That said, there had obviously been some good rehearsal time devoted to characterisations by the principals. Alissa King-Underwood, as Beauty, gave a very confident and mature performance – a fine young actress and dancer. George Kelly, as The Beast, was, in turn, ogrish and sensitive and Lol Smith, as his man-servant Mr. Shriek, put in a solid and amusing performance, his attempts to get the Beast dancing one of the highlights of the show. As unlikely suitors of Beauty, Kevin Wallace as Sir Toff Banoffi and Max Caldicott as Sir Fopp Dandy caught the audience’s attention with their various comic antics, whilst trying to repel the unwanted attentions of Beauty’s ugly sisters, portrayed admirably by Chris Baker as Agnes and Tony Knox as Doris, whose duet Gimme, Gimme , Gimme A Man After Midnight delighted the audience. Paul Riddy as the bankrupted Merchant Belly-Up, portrayed well the father trying to provide for his family in much reduced circumstances.

There was plenty of interaction between the characters and the audience, who seemed to be enjoying the evening’s entertainment in the true sense of panto and warmly applauded the cast at the end of their first night performance. 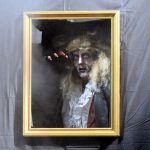